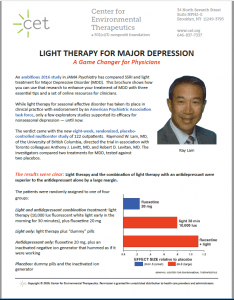 Light therapy, once typecast as the treatment for seasonal affective disorder (SAD), continues to increase its therapeutic repertoire. Last year, it beat Prozac (fluoxetine) hands down in an elegant study of major depression. (For details, download Light Therapy for Major Depression from cet.org’s collection of free fact sheets for professionals.)

This week, in a randomized controlled trial, light therapy continued to show its potential in the treatment of Parkinson’s Disease. Parkinson’s, one of the most common neurological disorders, is a progressive movement disease characterized by tremor, rigidity, stooped posture, and difficulty walking. Often, impairments in sleep and alertness accompany the disorder.

Bright light therapy was significantly associated with several improvements in the sleep/wake cycle, including a reduction in excessive daytime sleepiness. Other noteworthy benefits in the group receiving bright light therapy (vs the controlled light condition) include fewer overnight awakenings, better sleep quality, and greater ease in falling asleep.

This study is not the first investigation of the use of light boxes for Parkinson’s. However, it makes a significant contribution to a growing literature documenting the power of the inner clock and circadian rhythms to influence the success of medical interventions. It also raises the question of whether light therapy might reduce the motor, as well as the sleep, deficits of Parkinson’s.

Birgit Hӧgl, MD, an expert on sleep and circadian rhythms, praised the design of the research, and said the investigation “sets a new standard for future studies of sleep, wakefulness, and daytime function in Parkinson disease and we hope other diseases as well.”

Did you like this article? Please make a contribution so we can publish more.