How a champion sleeper and an insomniac learned to synchronize their sleep schedules.

It was the best of sleep, it was the worst of sleep—in the same apartment and the same bed. Abigail’s co-worker Clara and her partner, Javier, grew up in the same neighborhood and fell in love after college. It wasn’t until they moved in together that they discovered they had radically different sleep behaviors and attitudes. Could a sleep pattern established during childhood be changed to eliminate adult insomnia? Spoiler alert: unlike Dickens’ tale, this story has a happy ending.

Clara is a policy analyst at the city agency where I work. She’s known her partner, Javier—who goes by “Javi”—since childhood. “We grew up in the same neighborhood in Queens, and we were in the same after-school program for years as kids,” says Clara. “We were friends in college, and eventually we started dating.”

Falling in love with the boy next door sounds almost like a fairy tale. Reality hit after they moved in together. “Javi liked to stay up very late, and had a terrible time getting up in the morning,” remembers Clara, who usually goes to sleep by 11:30 pm. “Sometimes he was up because he couldn’t fall asleep, and sometimes he’d fall asleep but wake up a few hours later and not be able to fall back asleep.” (As a fellow sufferer of terminal insomnia, I could definitely relate.)

Javi likes reading in bed, which Clara appreciates. “Sometimes he reads to me and I fall asleep,” she sighs. “It’s kind of like when my mother read to me when I was a child. But she did voices; when she read the Fudge books by Judy Blume, she’d do her ‘fudgey’ voice.” Javi reads Clara the serious literature he enjoys, from a stack of scholarly biographies and histories on his side of the bed. 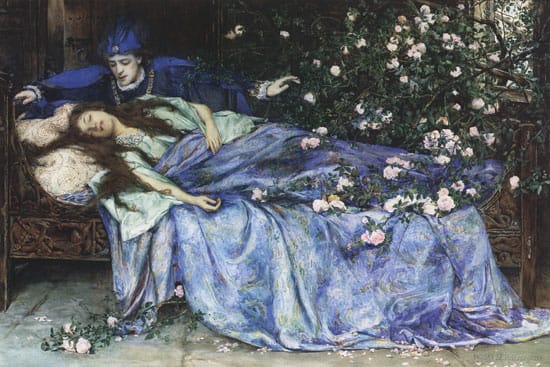 How does she fall asleep so quickly? wonders Javi

“On my side, I have four or five books that I’ve never finished,” admits Clara. “I get into bed and read a few pages, and then I fall asleep.”

Clara believes her parents successfully trained her to sleep well.

“I remember climbing up onto my dad’s recliner chair so I could nap on his chest,” recalls Clara. “He started napping with me when I was a tiny infant, and it must have continued until I was three or four.” As Clara grew, she continued to associate sleep with a sense of “happy coziness,” she reminisces with a contented, faraway look. “I was a shy kid, kind of a loner, so I was never afraid of being alone, and since I loved sleeping, I never minded going to bed.”

“Even as a teenager, I still used my bed just for sleep,” she says. “I remember being told that if you do your homework on your bed you’ll associate your bed with work, so I did my homework on the floor of my bedroom or the dining room table. In college, too—I never studied on my bed. The only time I read in bed is Saturday morning; it’s a nice, slow way to wake up.”

And Clara developed a special technique to help herself on nights when sleep eluded her. “When I was very small, I developed this image in my head of a bookshelf with rows of books in order—like the ‘Harry Potter’ or ‘Baby-Sitters’ Club’ series. Each book had its own topic, like playing with friends, and I’d think about that topic as I drifted off. Sometimes now if I have something on my mind, like a recurring thought, I ask Javi for a topic. He suggests things like dinosaurs” (which didn’t work) “or going to a Mets game” (which had happy childhood associations and helped soothe Clara to sleep).

The good sleep hygiene instilled by her parents and refined by Clara herself enables her to wake up refreshed and happy almost every morning. “I still love napping, too,” she confides. “On the weekends I’ll nap.”

Javi’s story was quite different. “Javi’s parents like to stay up late. If my parents stay up late, they end up falling asleep in front of the TV. But Javi’s mom—she didn’t like going to sleep. Javi thinks she influenced how he feels about sleep—like going to bed means you’re going to miss out on something. We blame our moms for everything, don’t we?”

Regardless of fault, Javi couldn’t understand how easily and quickly Clara could go to bed and fall asleep. “He would stay up if he didn’t feel physically tired—he’d say, ‘I didn’t work out today’ or ‘I slept late today.’ He didn’t think of sleep as a habit—more of a response to activity (or lack of activity).”

Javi tried reading in bed, but found that even the driest of academic tomes couldn’t lull him. He switched to popular fiction like spy novels or detective procedurals. When those failed, he turned to silly books like collections of “Garfield” cartoons. Still, he struggled to fall or stay asleep—and struggled even more the next morning to wake up.

Napping on Clara’s father’s chest wasn’t really an option, even though both sets of parents still live in Queens. So Javi did the next best thing: he adopted Clara’s sleep schedule.

“He made a New Year’s resolution to try to sleep better,” says Clara. “Now during the week he goes to sleep when I do, whether he feels tired or not. I usually fall asleep faster than he does, but he’s falling asleep faster than he used to and not waking up as much.” Javi still stays up late on weekends—for optimal sleep hygiene, it’s recommended that you get up and go to bed at the same time every day of the week. But his sleep pattern during the week has become much more regular and restful.

Is there a rule of thumb for deciding whether to use the light box...