A new lamp and a light filter to help you sleep make implausible claims.

Share
In a February 2014 post we showed two lamps that claim to ease sleep onset by eliminating the activating blue component of white light. The first in the market, several years ago, was the LowBlueLights (LBL) LED lamp. The latest is the Good Night lamp. Problem is, unlike the LBL, the Good Night does not eliminate the wavelengths of light that cause undesired activation in the hours before sleep, suppression of nighttime melatonin by the pineal gland, circadian rhythm phase delays, and sleep-onset insomnia. In fact, this lamp doesn’t differ substantially in blue emission from a standard 85¢ incandescent bulb. (It does use less energy and lasts longer due to its LED design, but the list price of $59.99 makes these savings a lot less impressive.)

Exactly what’s amiss here? Compare the output of these two bulbs with that of the old-fashioned incandescent. (For the technofreaks among you, the measurements were made with an Ocean Optics Model SQ2000 spectrometer with an integrating sphere, and all three lamps were set for equal lumen output. The graph below anchors each curve to relative output of the lamps. 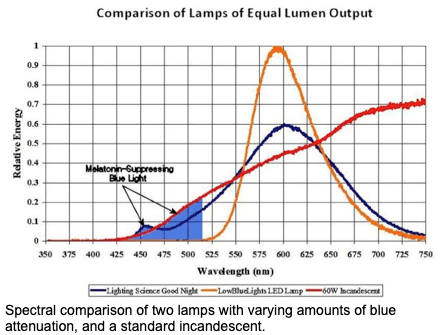 All three lamps succeed in eliminating ultraviolet emission (which is a liability of fluorescent lighting). The Good Night and incandescent lamps begin to rise in in similar ways in the blue portion of the spectrum (at around 440 nanometers). The Good Night shows only slight reduction of blue emission compared with the incandescent, and its output continues to rise throughout the blue range. In sharp contrast, the LBL completely eliminates blue transmission. What really counts here is the response of a blue-sensitive chemical in the retina of the eye, melanopsin. The highest sensitivity of melanopsin is around 460-480 nanometers, but it also responds to light above 500 nm, where the Good Night produces substantial energy, while the output of the LBL is negligible. The claim that the Good Night completely eliminates emission in the peak range of melanopsin sensitivity (460-480 nm) — which an agent of the company assured me — needs to be challenged. Okay, according to his new magazine, The Good Life, Dr. Oz uses the lamps in his own bedroom “to help him sleep better and live a more healthy life” — but should that convince us? As one experienced internist complains, “I spend too much time trying to dissuade patients from doing whatever it is that guy is touting this week….” What does thorough elimination of blue wavelengths look like? Let’s take an extreme case. Here are two copies of Picasso’s Self Portrait, painted in 1901 at the start of his famous “blue period.” 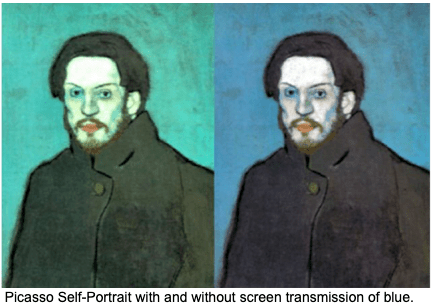 Right side, the original. Left side, blue removed from the computer screen, in a simulation of candlelight, by the free app, f.lux. Computer, smartphone, and tablet screens are major sources of bright blue illumination that can interfere with sleep onset. When you use f.lux, the blue pixels are actually deactivated in the screen. Another, more conventional, approach is to place blue-filtering sheets over the screen. This is the way the LBL filter and SleepShield work. The SleepShield, however, reduces light transmission only in the lowest part of the problematic range, 380-430 nanometers. The peak of melanopsin sensitivity lies much higher, around 460-480 nanometers, a range in which the SleepShield provides full passage! This makes no sense in terms of minimizing the circadian system’s response. 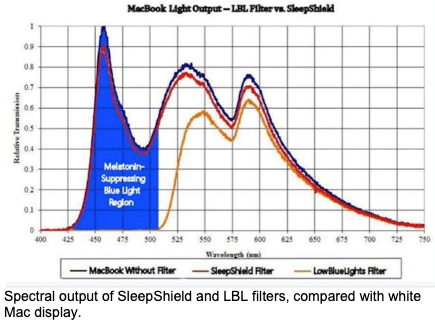 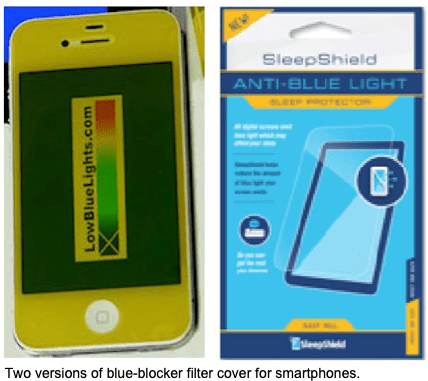 Here are three photos of an inherently blue aquatic scene: (a) unfiltered, (b) filtered with the SleepShield, or (c) filtered with the LowBlueLIghts screen cover. To eliminate melanopsin stimulation in the hours before sleep, you want to eliminate as much blue as possible, not just the lower wavelength tail….

If you’re an art history student, it’s important to be able to see all the true hues in a painting or photo.  However, if you do so in the hours before sleep, it may keep you awake, and make you inattentive in class the next morning. It’s a matter of priorities. Luckily there are well-tested, reliable technological fixes to be had. But there is untested or simply faulty emergent technology as well. Caveat emptor is still the best rule here. And so far, neither the FDA, the Federal Trade Commission, nor Consumers Union is going to offer you any help.