Blue light’s advantages for alertness are all contained in white light.

More than fifteen hundred of you have read our blog post, Light Therapy Good: Bunkum Bad, where we observed, with some distress, “To be competitive, each [company has] to offer something to distinguish their product from others. One way [is] to make it less expensive. And one obvious way to do that [is] to skip costly controlled clinical trials. Manufacturers of antidepressants and sleeping pills are legally and ethically required to conduct such tests, but a light box is not considered a medication, and is free of such requirements.”

Innovative technology proceeds apace, with companies including General Electric, Philips, Osram, Tabu, and LightingScience in the race.  One LED manufacturer is now selling a lamp that “keeps people pumped up by pumping up the blue.” Terry McGowan, an official of the American Lighting Association, puts it well in a New York Times Gadgetwise feature: “You have to start thinking of light as a drug.”

But how prudent would it be to start taking a new drug simply because the ads claim it works miracles?  Despite the aggressive promotion, it would never get to market in the first place without FDA evaluation and approval.  Even then, FDA would be on the lookout for exaggerated claims for the drug’s effects on body function.

What the media more wisely should report is scientific information about a lighting device’s effects, side effects, and comparisons with existing devices with a proven record.  This could be an important step for nonpartisan consumer organizations to take.  There is an important lesson to be learned from psychopharmacology.  When classic meds go generic, and become less expensive for consumers but less profitable for Big Pharma, the response is often to introduce and heavily market new medications that cost a lot more, but are often no more effective than the older, cheaper formulations.

Let us be clear here: Recent research shows that blue light indeed has very specific effects on our neurochemistry. There are specialized ganglia in the retina of the eye that contain a substance called melanopsin that is specifically sensitive to light in the blue part of the visual spectrum. These ganglia communicate directly to the structure in the brain that is the seat of the inner clock. Such neuronal stimulation in turn has profound influence on mood, energy level, and the sleep-wake cycle.  There are specific times of day when you want to stimulate melanopsin with enhanced blue exposure — often in the morning to help you wake up in time, but sometimes in the evening as well, if you are falling asleep too early.

So suppose you’re on deadline and starting to feel drowsy. Or it’s mid-February and you’re in that emotional slump you’ve come to expect at this time of year. Why not run out and buy one of those blue-light gadgets and start treating your problem?

Here are some reasons you should think twice about doing that.

New, and not yet fully tested for efficacy and safety 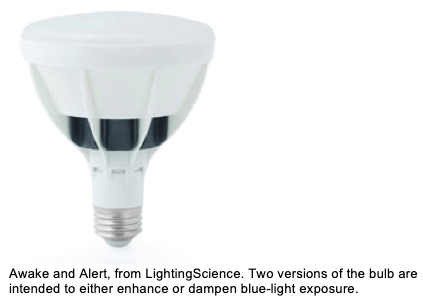 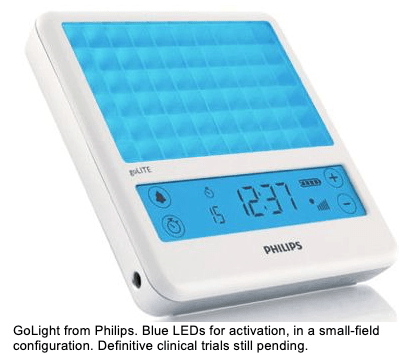 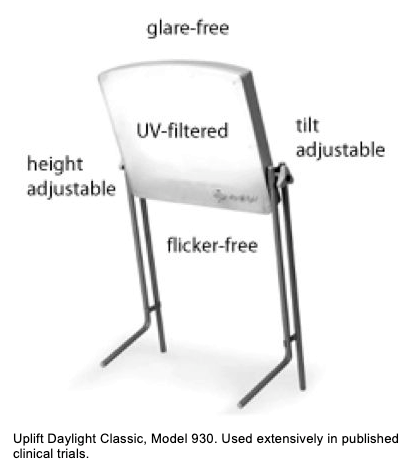 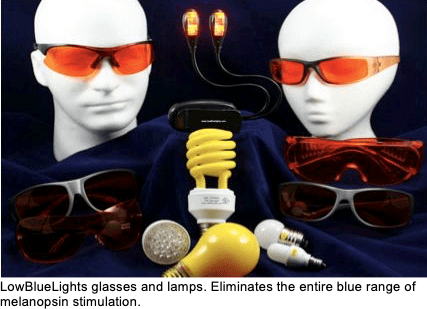 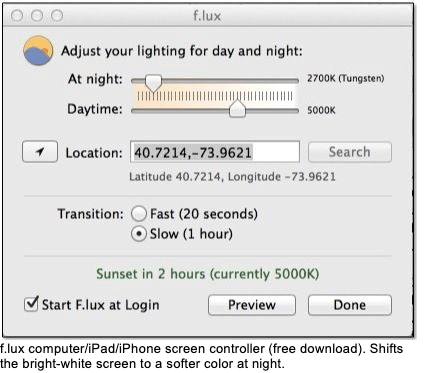 …and an interesting merger of LEDs with timed shifts in color temperature (for heightened and diminished blue), providing dusk-to-dawn simulation in the bedroom: 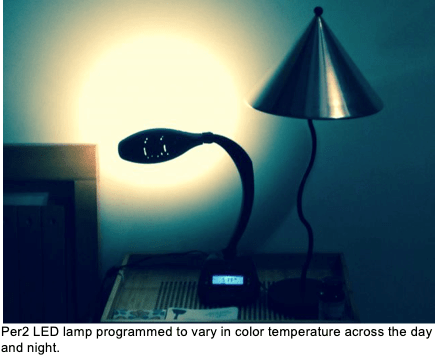 We end our post by quoting one recent commercial ad:

Items 2-4 are right on target, but Item 1 would legitimately be questioned by competitors.