Home When Depression Ignores the Seasons, but Light Therapy Works

When Depression Ignores the Seasons, but Light Therapy Works

Home / For Everyone / Blog Posts / When Depression Ignores the Seasons, but Light Therapy Works

When Depression Ignores the Seasons, but Light Therapy Works

Light therapy has not been an option for major depression. Until now.

It’s not news that antidepressants often don’t work. Even psychiatrist Thomas R. Insel, as director of the National Institute of Mental Health, said, “The bottom line is that these medications appear to have a relatively small effect in patients broadly classified as having depression.”

On top of that, the superiority of antidepressants compared with placebo in clinical trials has been declining over the past 20 years. Placebos are doing better than ever — so much so that some doctors are proposing that they’re legitimate treatments.

LIGHT VS. DRUGS: THE ACID TEST

Fortunately, Canadian psychiatrist Raymond Lam has now put antidepressants to the acid test. In a study in the November 2015 Journal of the American Medical Association, Dr. Lam and his colleagues pitted antidepressants against light therapy — not for SAD, but for the far more common major depression that can occur at any time of year. 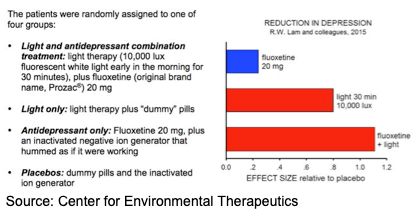 OUTCOME OF THE CLINICAL TRIAL

The day before Dr. Lam’s paper appeared online, I got a call from Medscape Medical News writer Pam Harrison. She asked my opinion on what everyone would call a startling set of results, and some would call controversial. I gave the trial top marks for study design and execution. The poor performance of fluoxetine was a surprise twist. Indeed, nearly 10 years ago Dr. Lam had reported virtual equivalence of light therapy and fluoxetine in patients with SAD.

All told, I concluded, “This is the most impressive clinical trial of light therapy I have seen, whether for SAD or non-SAD. It ran for eight weeks, longer than earlier studies, it used two types of placebo control, and it pitted the response against standard antidepressant medication.  If light had proved ineffective, or only weakly effective by comparison with fluoxetine, it would have consigned light therapy to the dustbin.”

A second twist was that despite the poor performance of fluoxetine alone, when it was combined with light therapy the patients did best of all. Clearly, many patients responded fully to light alone, but some needed combination treatment to see full benefits. Similarly, there are cases of SAD where light therapy provides only partial benefit and combination with an antidepressant provides full effect. Other SAD patients are already using an antidepressant, and want to find out if they can taper or discontinue the drug once they start light therapy.

It generally wouldn’t occur to patients with non-seasonal depression to try light therapy. However, that option should now be considered, just as switching to a new antidepressant might be. Bottom line, as I said to Medscape: “10,000 lux light therapy upon awakening — or by implication, a walk outdoors if the sun is up — now can be recommended to patients with recurrent depression, many of whom will respond without recourse to drugs.”

What do you need to know to make light therapy work for you?

And if you have questions, you can submit them to CET’s Ask the Doctor, a free service. Just first Search the questions that have already been answered.

Most important, especially if you have been taking an antidepressant, is to discuss these new findings with your doctor, and decide together whether and how you should bring light therapy into your daily life.