From Winter Solstice to Winter Doldrums

Home / For Everyone / Blog Posts / From Winter Solstice to Winter Doldrums

From Winter Solstice to Winter Doldrums

As of December 21 the sun’s on its way back… But what about you? 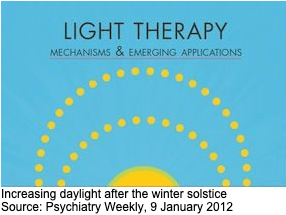 Obviously not! While it’s true that the solstice is a sort of promise of spring, we all know that promises aren’t always fulfilled quickly. In fact, for the most people who suffer winter doldrums and depression, the low point comes later, in February. And the symptoms almost always lift by May, weeks after the official beginning of spring.

No question: The winter doldrums and SAD lag behind daylight availability. Think of it as physiological inertia.

It is fascinating to track the onset and offset of the winter mood cycle. The onset is quite variable from person to person, even if they live at the same location and receive the same amount of sunlight. The start of the slump can occur as soon as late August — even before the fall! — with a sense of increasing fatigue, wanting more sleep, and beginning to eat more and gain weight. (That is not depression itself, but it is a precursor that indicates that the mood shift is on its way.)  At the other tail of the onset season — around the winter solstice, just when the sunlight begins its annual climb upwards — the depression hits more quickly.  For most people, though, the slump begins in mid-October and the depression arrives by Thanksgiving.

But what about spring and summer, when life gets better again?  Whether your slump hits in August, October, or December, early May is when you’re likely to see the gloom pass and the optimism return. That’s a whole month later than the spring equinox in March, when sunlight begins to predominate the day-night cycle. In a way, you’re “lucky” if your problem season starts in December, because it will be over by May (a five-month hit), while an earlier slumper will suffer for as long as nine months of the year!

The annual cycles of the sun are not the only important factor. Geography counts for quite a lot, though not quite the way most people believe. The common wisdom is that it’s worse the farther north you live, because winter days are so much shorter. Not so simple. Our research shows that the problem indeed gets more common as we go from the southern states to the middle states (at about 38 degrees latitude). But from then on it levels off and stays equally bad all the way north into the northern states and Canada. By the way, most of Western Europe is north of the 38-degree line, which explains while someone who lives in Rome is just as likely to suffer SAD as someone who lives in Stockholm.

Another factor, generally overlooked, is where you live within your particular time zone. Those who are more toward the western edge are at greater risk for winter doldrums and SAD. This fact tells us something important about the underlying trigger for relapses into winter depression. Time zone boundaries are simply arbitrary lines on a map, but they generate a situation in which the sun rises a full hour later at the western edge of a zone than at its eastern edge. In our book, Chronotherapy, we explain how this works and explore some of the implications for people and institutions such as workplaces and schools.

Why are some of us more susceptible to these seasonal problems than others? It looks as if the answer involves at least two ways people differ. One is a vulnerability to depression, and the other, quite separate, is sensitivity to low morning light levels. Either one creates problems, but both together create SAD. Without the vulnerability toward depression, those who are vulnerable to insufficient light exposure may still show certain physical symptoms associated with SAD, such having trouble waking up in the morning, having a foggy head for a couple of hours, and craving and eating more food than normal. Yet they are not depressed!

What do you do if you find yourself oppressed by the winter blues? Do you have to wait until spring for relief? Of course not! Bright light therapy offers a quick and effective intervention, often with no need for medication or psychotherapy. It gets to the heart of the problem, which is not getting enough morning light exposure at the end of your circadian night. The inner clock controls day-night physiology, and the circadian night can fall at different hours from when you choose — or have — to sleep.

The key to effective light therapy is to learn where your inner clock lies in fall and winter, and to time light therapy sessions at home accordingly.  Short of lab tests for inner clock timing, a free, online chronotype questionnaire from the nonprofit Center for Environmental Therapeutics provides a close estimate. (See CET’s Self-Assessment section.) Anyone with full-blown SAD, however, should start light therapy only with their doctor’s knowledge and monitoring, because there may be rapid changes that require professional attention.