Home Indiana: Where It’s Always Later Than You Think!

Indiana: Where It’s Always Later Than You Think!

Indiana: Where It’s Always Later Than You Think!

Politics trumps geography in telling the time of day … and residents pay for it.

Quick: Which town is closer to Indianapolis — Chicago? Or Bangor, Maine?

A glance at a map would tell you the answer is Chicago. But if you go by the clock on the wall, Indianapolis, like practically all the state of Indiana, is closer to Maine than to Illinois. When it’s 8:00 AM in Bangor, it’s 8:00 AM in Indianapolis, too. But it’s still only 7:00 AM in Chicago, less than a hundred miles farther west.

The reason for this odd situation has to do with time zones.  Time zones are administrative conveniences that usually have similar widths of about 15 degrees of longitude, which correspond to 60-minute spans. In the US, that would put the western edge of Eastern Standard Time close to the border between Ohio and Indiana. That means Indiana ought by geography to be in the Central zone.

Not according to Indiana lawmakers, however. Except for a few counties in its far western corners, the state of Indiana follows Eastern Standard Time. Why? Supposedly so that Indiana businesses can be in sync with the New York Stock Exchange! (We should note that businesses in Chicago, Denver, and San Francisco seem to be doing okay, even without this concession.)

This matters more, and in more ways, than you might think.

WAKING UP IN THE DARK 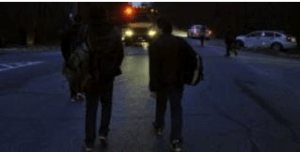 Unfortunately, hers is not an irrational fear. Sue Dillon of Carmel, Indiana, is president of the Central Time Coalition, an organization that favors returning Indiana to the Central Time zone. She became deeply involved in the issue after a terrible accident in her town. “A local fifteen-year-old student slipped and fell under the wheels of his school bus,” she explains. “This accident occurred at six-forty-five AM, and the boy wasn’t found for another twenty minutes. Now he is dead and morning darkness was a major contributing factor.”

GETTING DEPRESSED IN WINTER

Adults are affected too. Our research has shown that as you move west through a particular time zone, the proportion of people who suffer from seasonal problems with depressive feelings — the “winter blues” — climbs steadily. Then, as you cross the imaginary line into the next time zone, the proportion drops again. Those in Western Indiana, according to this, may well have a still bigger problem with winter blues than people who live in areas where the time zone more closely follows what the map says.

There is nothing mysterious about this effect. Our emotional state is deeply affected by exposure to bright light early in our waking day. Suppose you have to get up by 7:30 AM to get dressed, have breakfast, and get to work on time. It’s early January. If you live in Champaign, Illinois, the sun has already been up for 15 minutes when you get out of bed and look out the window. But just 60 miles east, in Williamsport, Indiana, it’s still pitch dark outside when your alarm goes off. Sunrise won’t come until after eight, when you’re already leaving for work. That’s a recipe for feeling down.

Of course time zones are not going to go away. Imagine the confusion if each town and city set its clocks to show noon when the sun was directly overhead.  But there are things we can do, both as individuals and as members of a community. For those stuck in the western sections of their time zone — and especially for those, such as most Hoosiers, who are pushed even farther west in their zone than geography would put them — morning bright light sessions offer one way to counter the darkness outside.

More broadly, early school starting times are scandalously out of touch with the sleep-wake cycles of their students. We discussed this issue in a previous blog post, and nothing we said there has changed. As Erin D. and Sue Dillon point out, starting school so early also poses an important safety issue during the winter months. Even if politicians cannot be persuaded to align local clocks with the map, maybe local school officials will see the logic of starting school later. The effects on students may surprise them: safer morning journeys to school, a more positive mood, better attention and alertness, and even, according to research on the subject, higher SAT scores. And what school board wouldn’t want that!