Home Sunlight Is the Best Medicine

Sunlight Is the Best Medicine

Home / For Everyone / Blog Posts / Sunlight Is the Best Medicine

Sunlight Is the Best Medicine

A warm welcome-back to Abigail Strubel, social worker, writer, mental health advocate, and chronotherapy aficionado. Here she delves into some surprising historical precursors of light therapy for both medical and psychological afflictions, which demonstrated positive effect long before the current era of definitive placebo-controlled clinical trials. 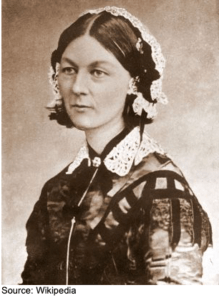 Pioneering nurse Florence Nightingale was rigorous not only about kindness and cleanliness — she maintained meticulous statistical records about her patients to determine the most effective treatment practices.

In addition to encouraging good ventilation, promoting adequate sleep, providing a nutritious diet, and allowing plants and flowers in the sickroom (she knew that they provide oxygen and consume carbon dioxide, as well as provide a pleasant focus), Nightingale was an enthusiastic proponent of allowing as much natural light into the patient’s room as possible.

As she wrote in Notes on Nursing, “It is the unqualified result of all my experience with the sick, that second only to their need of fresh air is their need of light…And that it is not only light but direct sun-light they want.” She knew that her patients in rooms facing east recovered more quickly than those in rooms facing other directions — or in windowless rooms. She observed her patients turning their faces toward light and compared them to plants following the sun in its course across the sky. We cannot be sure whether this light acted as a mood and energy enhancer in the hospital room or also contributed to ridding of her patients’ infections or other disease processes. But her realization was perspicacious and foretold of light therapies, in various forms, that continue in active development. 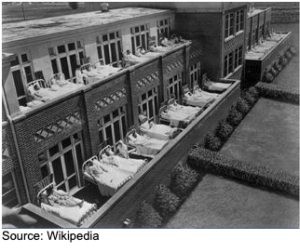 Similarly, before the development of antibiotic therapy for tuberculosis, sanatoriums addressed the worldwide pandemic with sunlight. Doctors noted that patients who lay in the morning sun gained more weight and went home sooner. This became standard practice around the world:

What Nightingale observed more than a century ago, modern science has now proven. Sunlight reaching the eyes can reset a person’s circadian rhythms, enabling a healthier sleep-wake cycle and better healing. And it can be deployed strategically to treat mood disorders in particular. Don’t take my word for it — here’s some more recent evidence:

A modern heir to Rollier and Aalto is Dr. Richard Hobday, who is what the British call a “chartered engineer.” I might not recognize that term, but I’m impressed by his research and practice. Hobday’s book, The Light Revolution: Health, Architecture and the Sun, delves into the history of how sunlight has been used to alleviate conditions ranging from rickets to heart disease. He advocates “5 Points of Solar Architecture for Health”:

As I prepare for a surgery in the spring (once the winter burden of SAD has passed), I’m definitely going to ask the hospital if I can be placed in a room with an eastern exposure. And after I go home, I’ll be sure to spend plenty of my recovery time relaxing (well-sunscreened) in Central Park, soaking up the healing sunlight.