Here are some sleeping champions of the animal world: animals that sleep the most, the least, or have an unusual way of getting their rest. 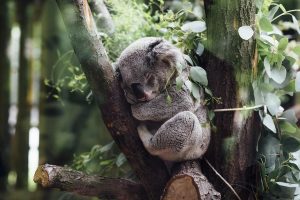 The competition to sleep longer than any other animal is fierce. Some bats, the North American opossum, the python, and the armadillo all sleep nearly 20 hours out of 24. However, the koala bear wins when it comes to sleeping overtime by clocking 22 hours per day.

Upside Down and Ready to Fly: The Bat 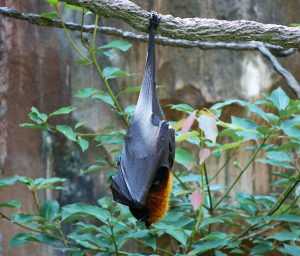 Depending on the species, bats can sleep up to 18 hours per day.  However, these nocturnal mammals are more distinctive in another way: they sleep upside down. Their feet relax in a clenched position, making it easy for them to hold on to tree branches and rock. When a predator wakes them, they let go, gaining momentum by falling. They then have a head start flying away.

Most Versatile: The Walrus

Walruses can snooze anytime, anywhere. If they are in the water, they can fill part of their bodies with air, and sleep as they bob up and down. They can also hang onto ice floes with their teeth while sleeping. Later, they can remain alert for more than three days, non-stop.

Giraffes rarely sleep for more than a few minutes at a time, amounting to only half an hour a day. Scientists did not even realize giraffes slept at all until the 1950s. Here a baby giraffe, like Churchill and Einstein, enjoys a nap. 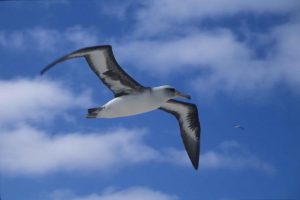 The albatross is no birdbrain. It glides on air currents, rather than flapping its six-foot wings, to provide lift. Scientists believe the albatross does this during slow wave sleep, which only uses half the animal’s brain. When it lands, it engages in rapid eye-movement (REM) sleep, which requires both halves of the brain, and reduces muscle tone, so flight is not possible.

How to Help Your Child Get the Right Amount of Sleep: Guidelines and Six...

The Sleeping Problems of Children

If I wake up later than my ideal time on the weekend, should I...

Can I use a light box while lying on my stomach?