Why I brought my light box to Chicago

Our intrepid Abigail Strubel, having experienced an array of disappointments with one treatment or another — admittedly sometimes with temporary relief — hones in on light therapy, to which she gets seriously attached. —Michael Terman

In November of 2014, my cousin’s daughter celebrated her bat mitzvah in Chicago. I live in Manhattan, but I was eager to celebrate with her and my family. However, I was anxious on one count: with the onset of Standard Time in November, I start using a light box to combat my Seasonal Affective Disorder (SAD). The box isn’t heavy, but neither is it small. So I debated whether to pack it, or chance the weekend without it.

The Monday after the celebration, I was slated to start a new job as clinical supervisor in a busy substance abuse clinic. I knew I had to hit the ground running; I couldn’t bring my B game on the very first day. So when I packed my suitcase, I included several fancy outfits, my toothbrush, makeup, and my light box, wrapped in several layers of clothing.

TO BE OR NOT TO BE WITH A LIGHT BOX

I called the airline to ask about taking the light box through security; I didn’t want it confiscated, and emphasized that I needed it for medical reasons. I was advised to take the light box out, and put it in a separate bin for screening, when I got to the airport.

None of the Transportation Security Administration (TSA) agents batted an eye as I unbundled it from its swaddling and placed it carefully in a bin, which sailed through the X-ray on the conveyer belt just ahead of my suitcase, purse, and shoes. Relieved, I retrieved all my belongings and went to the gate. 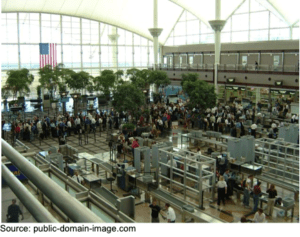 At home, I’d been using the light box from 6:45 to 7:30 a.m. So at approximately 6:45 a.m., a few hours before my flight was due to take off, I plugged the light into an electrical outlet near one of the seats at the gate, placing a book in the next seat.

When you use a light box for SAD, you don’t look directly into the light itself; you look at a piece of paper or something pale near the box, and the light reflects into your eyes. First I tried sitting two seats away and putting a book on the seat between me and the box, but I was too far away; optimal distance between you and the source of light is 12 inches. Sitting on the seat next to the box with the book in my lap, I had to hunch my neck uncomfortably. Ultimately, I sat on the floor, put the book on the seat next to the light box, and read the book.

THE STRANGE WOMAN SITTING ON THE FLOOR

The usually good thing about New York is that most people don’t notice what’s going on around them if they’re not personally involved. Glancing up furtively from time to time, I never noticed anyone watching the strange woman sitting on the floor near a row of empty seats and a peculiar lamp. After 45 minutes — the time my doctor and I have determined is necessary for me — I unplugged the lamp and waited a few minutes for it to cool before rebundling it in clothing for the flight.

GOOD LUCK, AND A HAPPY ENDING

Traveling with the light box isn’t convenient, but for those of us with SAD, it might be necessary. I was happy that no TSA inspector took or broke it, and it survived the journey as well as I did. That Monday I faced my first day on the new job confidently, energy and concentration intact. 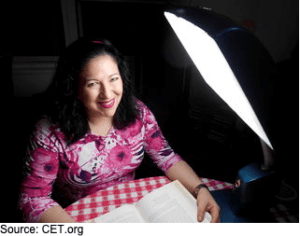 ABIGAIL STRUBEL is a Columbia-educated clinical social worker and certified alcohol and substance abuse counselor who uses light therapy to cope with her annual seasonal affective disorder, and also manages chronic insomnia through acupressure and good sleep hygiene. She has worked with formerly homeless adults, ex-offenders on parole, recovering heroin users, and other interesting populations. Her approach to wellness is a fusion of all compatible treatments — alternative or not — that make people feel better while also objectively reducing medical problems.