Home Where Did You Get That Chronotype?

Where Did You Get That Chronotype?

The chances are very good that your sleeping and waking habits are more like those of your parents, brothers, and sisters, than like those of some stranger down the street. Researchers have found that chronotype has a strongly heritable component, maybe as much as 50%. For example, identical twins, who share the same genetic make-up, have more similar chronotypes than fraternal twins, who share only some of their genes. Genes are not the only factor that can make some characteristic heritable, however. For example, people often treat identical twins more similarly simply because they look alike. This, in turn, makes their social environments more alike. Still, the evidence is mounting that different versions of certain genes are linked to different chronotypes.

At the same time, the fact that someone’s chronotype can change across the lifespan suggests that factors other than genetic background may also have a crucial impact. Do we know exactly what these factors are or how they work? No, not at this point, but we can suggest some of the usual suspects. The prenatal environment almost certainly plays a major role, as do a host of childhood experiences. To muddle the question further, what seems from the outside like the same experience or environmental factor may have a different impact on two children who have different genetic makeups.

Whatever the causes, every one of us ends up with a particular circadian clock that, as 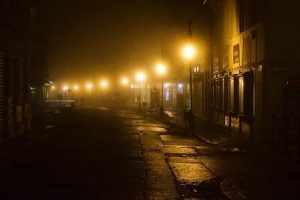 a general rule, does not quite coincide with the day-night cycle of the outer world. We can think of this as a basic trait, a biological and neurological something that characterizes us throughout our lives. Within limits, however, it is adjustable. The passage of the seasons, a move to a different latitude—even something as seemingly trivial as the installation of a brighter streetlight outside the bedroom window—can alter the state of our chronotype, or the way it expresses itself in our daily life.

Here is a case in point: We described earlier the tendency for teens to become more owlish. However, this does not mean that all teens become flat-out owls. Some remain larks or hummingbirds, if a little less larkish than they were before puberty. Now send them off to college. No parents around to announce “Lights out!” and roommates and dormmates who are themselves actually owlish. Add to that the general assumption that early bedtimes are for little kids and staying up late is a sign of adulthood. Late-night talk sessions, clubs that start to come alive after midnight, one more text exchange with someone back home or across campus, or one more round of that computer game, and before you know it these larks and hummingbirds are pulling down the shades on the bedroom window to shut out that pesky early morning light. Soon even someone with the genetic makeup of a lark can be sucked into having the behavioral profile of a total owl. As for those whose basic traits are owlish, they may find it impossible to get to sleep before dawn. Early morning classes? Forget it!