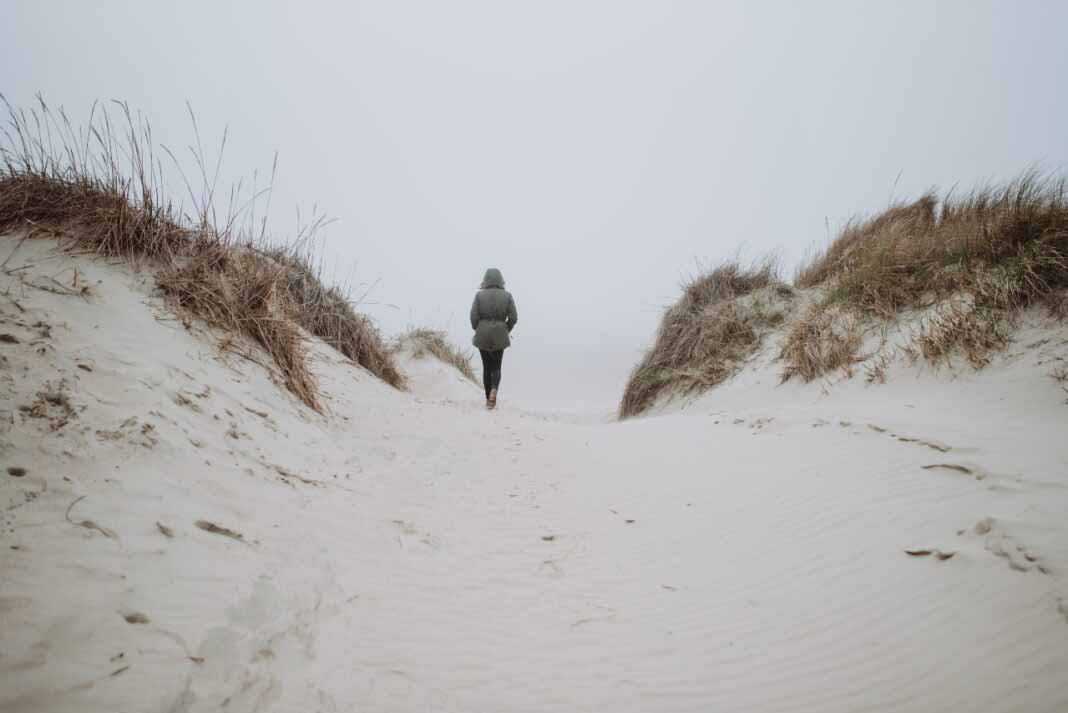 Seasonal affective disorder (SAD) is operationalized in the Diagnostic and Statistical Manual of Mental Disorders, 5th ed., as a subtype of recurrent major depressive disorder with episode onsets at a particular time of the year (not necessarily winter), and with full remissions (or onset of manic or hypomanic episodes) occurring at an alternate time of the year. To make the diagnosis, two qualifying depressive episodes must have occurred in the last two years, with no nonseasonal episodes. Over the patient’s lifetime, seasonal episodes must have substantially outnumbered nonseasonal episodes.

Here we have the combination of a snapshot requirement (the last two years) in combination with the patient’s retrospective judgment of lifetime experience, and considerable flexibility about when in the year the depression hits. However, the usual and most researched seasonal pattern is that of recurrent fall/winter depressive episodes.  The two most striking factors in this diagnosis are the link of low mood to the dark days of winter, and the so-called atypical symptoms of increased sleep need, carbohydrate craving, and weight gain. These symptoms are characteristic of the majority of patients — who are also the most likely to respond to light therapy — but they are by no means always present. To sharpen our understanding of SAD, then, it is useful to parse the potential population in different ways.

A random-sample survey of adults in New York City indicated that as the seasons turn toward the winter months, mood declines, fatigue increases, sleep lengthens, and appetite and weight increase in the population as a whole. Interest in social activities spurts upwards around the holidays, but otherwise declines until the spring. Mood may also decline during the most sweltering months in the city, but not to winter lows, and without affecting social interest. 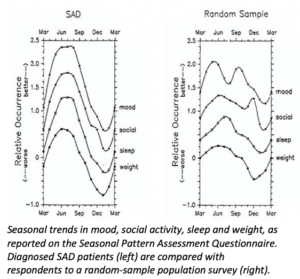 Of course, this is an average result, and not everyone shows these seasonal changes. But people who suffer from SAD should know that they are not alone in noticing these symptoms. The difference is that they become clinically depressed, while the others don’t. There are some who suffer milder winter doldrums, short of depression (the “winter blues”), yet also report being bothered by the seasonal change. However, the majority of people, while noticing these seasonal changes, considers them a normal aspect of life at temperate and northerly latitudes.

The figures to the side show the high amplitude seasonality of many symptoms in patients with SAD (left), worse in the winter months and feeling good in spring and summer, when all these symptoms vanish.  The random sample (right) shows similar trends, but with a much lower change from winter to summer.

For people with SAD, a Swiss study indicates that winter depression does not necessarily occur every year, but regularly enough to outweigh depressive episodes that might occur in other seasons.  Some years it may feel like winter doldrums, short of depression, while other winters may pass without difficulty.

Yet another group of people experience the hallmark “atypical neurovegetative” (ANV) symptoms of SAD — with lower energy, need for more sleep, higher appetite and eating — without feeling depressed. They do not suffer an affective disorder marked by blue mood, but fall into a spectrum of recurrent fatigue, sleep, and eating disorders. Open treatment with light therapy suggests that these patients are also responsive to light therapy; clinical trials are needed.

The ANV group is especially important for understanding SAD, because these vegetative symptoms appear around a month earlier in the season than the mood symptoms that signal the start of the depressive episode. This sequence in the seasonal timeline is very useful information for SAD patients, who can then anticipate a plunge into major depression weeks later, and would otherwise begin light therapy only once symptomatic. By detecting these vegetative precursors of the mood episode, they can begin light therapy before relapsing into winter depression, with the possibility of avoiding the winter episode altogether.

Finally, consider a relatively small group of seasonal patients who relapse into winter depression without atypical neurovegetative symptoms. Unfortunately for them, the likelihood that they will respond to light therapy is significantly lower than their counterparts with atypical symptoms. In our limited experience, the recourse for them is a standard course of antidepressant medication; it is unclear that adjunctive light therapy will help.

This variation in seasonal symptom pattern leads us to view the cycle of vegetative symptoms as distinct from the depression itself, yet linked to it by anticipatory timing. Watch out for that carbohydrate craving late at night! It’s a first sign that winter — and perhaps winter depression — is on its way.

Note: CET offers a variety of instruments for diagnosing atypical depression and rating the severity of atypical neurovegetative symptoms:

Michael Terman PhD is a research psychologist whose studies have spanned circadian rhythms of behavioral, retinal and sensory response to dim and bright light in the animal lab, to bright light therapy response and naturalistic dawn simulation in patients with winter depression. 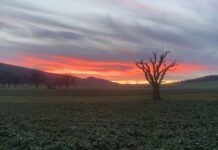 The Timing of Sunrise Within U.S. Time Zones . . . and SAD 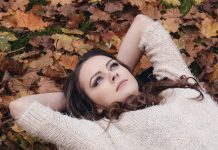